The answer is yes, dental implants can be used to replace an entire set of missing teeth. However, this doesn’t involve placing 28 implants (one for each tooth that needs to be replaced). The size of dental implants would make this difficult, as the different implants might crowd each other. Additionally, it’s not necessary to use so many implants.

Instead, several implants placed into the jaw are used to support a full denture, which is known as an “implant-supported denture.” The minimum number of implants needed is four, although most dentists prefer to use a few more. (The procedure is sometimes known as “All-on-4” because all of the artificial teeth are supported on four implants.) The more implants used, the more stability the denture will have. Additionally, with more implants, there’s less force placed on each one, increasing the chances of long-term success of the procedure. 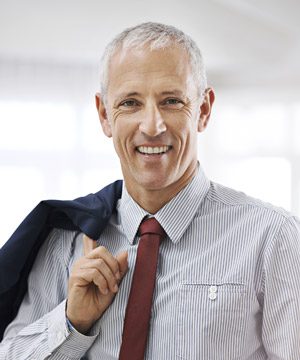 CAN IMPLANT-SUPPORTED DENTURES
BE USED IN BOTH JAWS?

ARE YOU CONSIDERING
IMPLANT-SUPPORTED DENTURES IN KIRKLAND?

If you’ve lost many or all of your natural teeth, then you’re likely considering this option for replacing them. To decide whether implant-supported dentures are right for you, you’ll need personalized professional advice from a dentist trained in the placement of dental implants in Kirkland. Dr. Arkadi Razoumovich of Seattle’s Best Smiles can provide you with top-notch expert advice on this topic. If you’re considering implant-supported dentures in Kirkland, please contact our office to book your appointment with Dr. Razoumovich.

Dr. Arkadi Razoumovitch, DDS provides cosmetic, restorative, and implant dentistry in a comfortable, professional environment. Dr. Razoumovich received his Doctor of Dental Surgery degree from The University of Washington. He has had extensive post-graduate training, including residency training at the University of California Los Angeles, and is a member of numerous professional organizations including The American Dental Association and The Academy of General Dentistry. Dr. Razoumovich makes dental treatment relaxed and comfortable for patients while enhancing their oral health and beautifying their smiles